I’m glad I do written reviews because I have absolutely no clue how to pronounce Arraial. I looked up how to pronounce Arraial and I have more questions now than before. As best as I can tell if you try to gurgle some marbles you’ll get close. I feel a kinship with the subjects of those “Watch This German Try To Pronounce ‘Squirrel’” videos.

Now I just call it “that Tetris game” because, despite what the joyous, sunny art may suggest, this is as close to that stodgy Soviet block game as I’ve seen in analog form.

Tetris gets its thrills from continually increasing time pressure. Arraial pivots hard in the other direction by making it more contemplative. Instead of simply trying to survive before the blocks overwhelm you, in Arraial you’ve got to work with various colors of blocks, joining them together into pairs or the largest groupings among your competitors.

“Clever” is a good word to use to describe Arraial. It’s clever in the way it adapts Tetris to a turn-based board game. Instead of blocks clearing when a row fills the ceiling rises. Rotating pieces takes up precious action points, and rotations count for everyone. In some cases you’ll want to forgo other actions in order to rotate pieces in such a way to frustrate the next person.

I love how different shapes are constrained to particular colors. If you want a square piece or the coveted long block you know, if it does come, what color it will be. This simplifies and frustrates your planning. You want to join two blocks of the same color, but if the first block doesn’t create a good space for the second, will you have to compromise to score that point or try to fill space precisely and squeeze in the connection later?

At its best Arraial creates those moments where your mind drifts between different strategic decisions, poking around for the right move. It’s casual, in the right way, in those moments. Too easily it can tip into boredom as you wait for your turn to arrive, someone else’s decision-floating feeling more like idle time slipping away needlessly.

It’s one of those games that works as long as you don’t think about it too much. Look too closely and those different options all start to look the same, a bit of push-your-luck waiting to see what the deck reveals.

Thank goodness for the art, which hits the exact right tone for what Arraial should feel like: a frivolity. The sort of game you’ll forget about until someone brings it up, years later, and you smile, remembering.

“Oh yeah, that was a good time…Is that how it’s pronounced?”

7 Games I’m Glad Exist (because they’re interesting and quirky, even if they may not fully succeed) 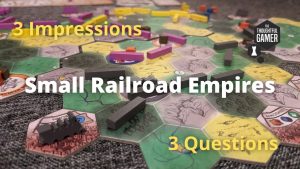