I can distinctly remember the first time I played Mastermind. We were in Canada on vacation. My grandparents had rented a house for the summer, and my family took a trip up there, exploring the sights of British Columbia on the way. The house was on a lake and awesome. I fit myself into a too-snug kayak and barely squeezed out of it. I caught some fish. But one night I spotted a game tucked in amongst the books in the shelves. “Mastermind” was an intriguing title, and while it was not the version with the weird cover, the description on the box made teenage me excited enough to try to rope a member of my family into playing.

I loved it. I loved that there was a game built upon the rigors of logic. I loved the mind games, the tension, and the grind. Soon I ran out of people willing to play with me.

My love of Mastermind is, I’m sure, almost entirely nostalgic. I don’t think I’ve ever played it since. But when I got the chance to try Telepathy, a game described to me as “Battleship meets Mastermind”, my mind drifted back to that lake house when I was 14 and I eagerly accepted. The problem is that comparing the two games is entirely unfair. That’s comparing Telepathy as I’m experiencing it right now to Mastermind in my youthful memory. So is it better? I have no clue. It certainly doesn’t seem better, but I’m old and bitter now, who who knows? It’s certainly better than Battleship. 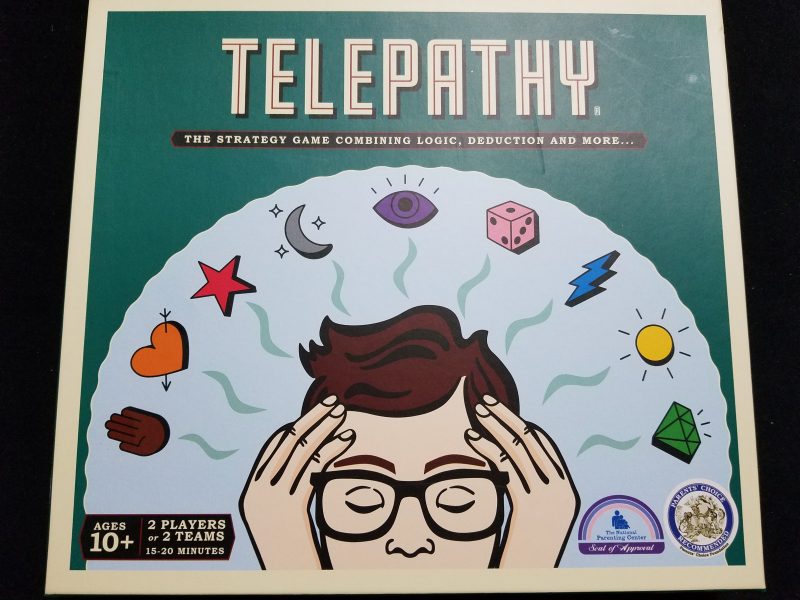 The high-concept description I was given is spot on. Each player is given a grid hidden by a screen, and they’re trying to find something in that grid that the other player selected in secret, just like Battleship. But instead of blindly guessing at locations, you’re only going to be mostly blindly guessing at locations. Each location on the grid has 4 elements: the x/y coordinates, the color, and the symbol. Players go back and forth guessing particular locations. If at least one of those four elements match the space you’re trying to find, your opponent says “yes”. Otherwise they say “no”. From this information you narrow down the potential locations until you’ve got the answer.

The problems with Telepathy are the problems that plague most deduction games–it’s just deduction. So you make some random guesses until you can guess more strategically, and then after a certain number of guesses you’ve deduced the answer. The number of guesses it takes to be able to make better guesses and the time it takes to get to the answer is ultimately luck; once you’ve figured out the basic methods of finding concrete information, the game is, in essence, solved. 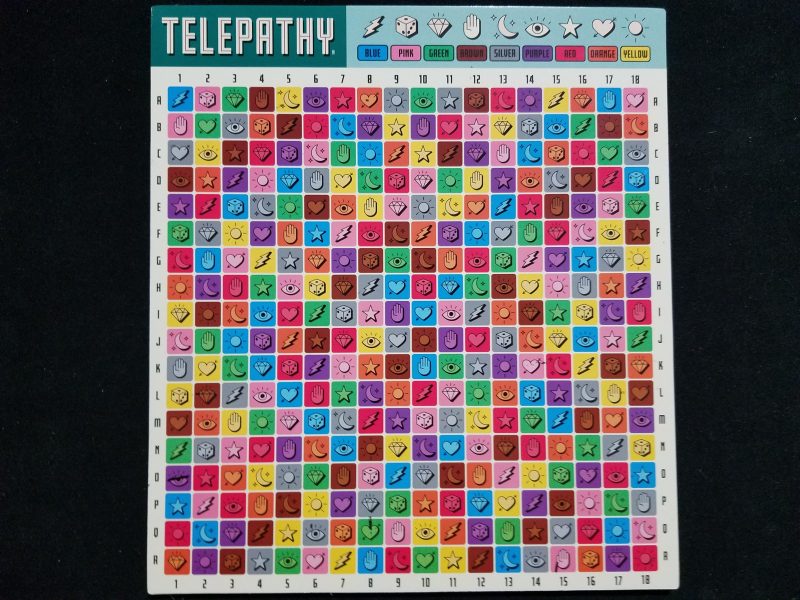 It’s a variation on some of the issues I had with Hunt For The Ring, where you quickly figure out your odds, killing the tension. Fortunately, Telepathy takes minutes rather than hours, so it works better as a bit of a diversion where Hunt For The Ring can feel like a dud evening. However, Telepathy, while attractive, doesn’t have any kind of narrative attachment; it’s only guessing.

The Shipwreck Arcana is still my preferred deduction game because it manages to move a bit beyond “pure” deduction, where Telepathy remains static. The former has your teammates setting the inputs, so you’re not only solving what can be strictly deduced, you’re seeing what they could have done but didn’t, and trying to figure out how well they made their decision. You’ll have moments where you contemplate, “how smart do I think this person is?” The only input decision your opponent makes in Telepathy is essentially a randomizing device–it doesn’t create any nuance.

That said, I think I have a soft spot for this genre because I still enjoyed the games of Telepathy that I played. I like the puzzle solving, as simple as it is, as an exercise. I love the tension of feeling that your opponent is close to solving, while you’re desperately trying to find that one last piece of the puzzle. The cadence of Telepathy tends to accelerate as you progress–the early parts of the game will be a lot of guessing, but once you latch onto one or two concrete pieces of information the solution suddenly becomes within reach. 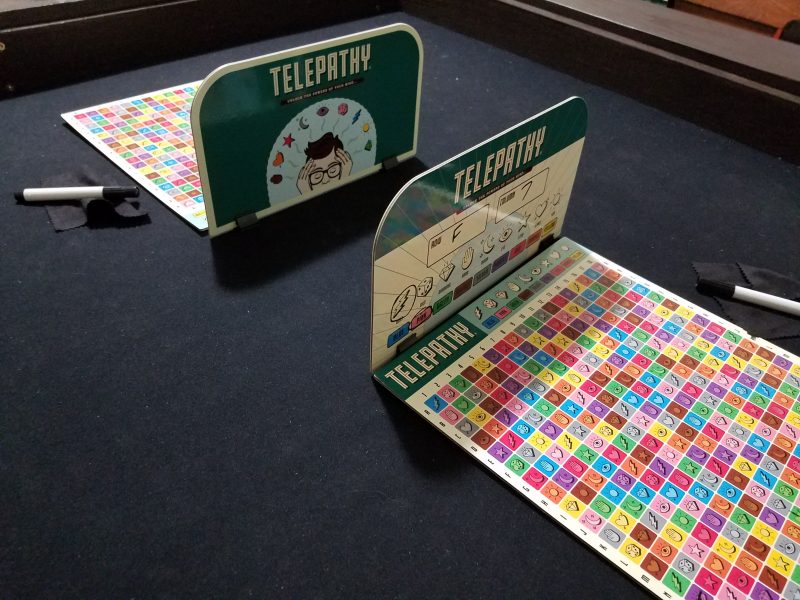 But in the end it’s not a classic. It’s certainly a strict upgrade from Battleship, and if you love Mastermind this is a much more attractive variation on that theme, with its bright colors and dry-erase system. But there are better deduction games out there, and there are many better quick two player games. I think the best audience for Telepathy is going to be families, not necessarily nerd gamers playing with other nerd gamers. I think I would have loved this in High School.