Once, when getting out of my car at the grocery store, I was approached by a guy holding out a CD. He earnestly inquired, “hey, man! Do you like hip hop?”

This was a confounding sequence of events for me, for a few reasons.

After a quick mental assessment of all of this, I mumbled “not really, sorry” and hastily walked away. Smooth.

I say this entirely without criticism and with complete admiration: Wibbell++, the card game system designed, illustrated, and published by Behrooz “Bez” Shahriari (and others–you’ll see why in a bit), looks like the kind of game you’d stumble upon in a parking lot, a stranger holding it out to you with a smile. “Hey, man! Do you like word games?”

As a matter of fact I do like word games, and I’m here to report that the two solo games currently playable with the Wibbell++ deck, Extendabell and Mickell, are quite good! They’re both word construction games, harkening back to Scrabble or Boggle. That’s going to cause more than a few of you to back away from this review slowly, pained expressions on your faces as memories of those games come flooding back. That’s fine! But consider this: do you have bad memories of those games because you don’t like the mental exercise of word construction, or because there’s a kind of social shaming that can happen with those games? If the latter, you don’t have to worry about that here because we’re talking about solo games.

Also, as I mentioned before, Wibbell++ is a game system, and there are currently at least 7 different games from various designers you can play with the deck. The cards themselves have a few features that hint at the kind of rampant iteration we can now see is possible. Most prominent are the two large letters in the center of the card which form the basis for both of the games I’m looking at today. But also each card has a number and a border which could sort of function as a suit. The numbers indicate the rarity of the bottom letter on the card, but could potentially be put to their own independent use. I’ve peeked at the multiplayer games included in the box, and they seem interesting, but let’s focus on the solo fare first.

The rules of Mickell are deceivingly simple. All you’re going to be doing is playing a card down one at a time to try to form words in up to three rows. It’s a simple ‘draw a card and play it’ kind of thing, but it’s aided by the very precise construction of the Wibbell++ deck.

You’re given three rows in which to construct words, and you’re strongly incentivized to complete longer words as they give you more points. A common 4 letter word, for instance, only scores two points, but if you can bank an 8 letter word (which I’ve actually done!) you get all 8 points.

The problem is that you don’t have a hand of cards at all. You’re stuck with the single card that you drew (and you’re going to draw all of them), and you’ve got to somehow make it work. You do you have the choice to discard it, but discarding feels like a shameful act. You’re literally throwing away potential points! I discard frequently. 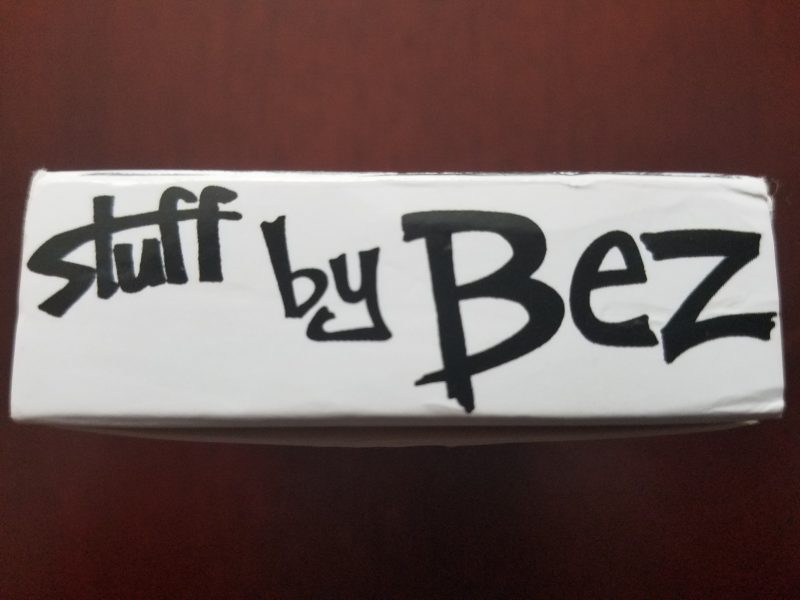 Because you don’t have any choice on what card to play, you need to make sure that you’re prepared for a wide variety of situations as you progress the letters into something can can form a word. On multiple occasions I’ve found myself stuck because I drew a card with two consonants on it and I didn’t prepare well enough for that situation. Or a couple of times I went for very particular words that I thought I could construct in two of the rows, but that left me either adding cards that might end up working out into words in the third row or discarding again and again and again until the letters I was looking for appeared.

So it’s not just a game of seeing letters and making words from them, it’s about understanding how english language words are constructed and keeping your rows flexible enough to handle whatever card you draw. Each row is a rapidly converging possibility space of language, and while you might find a moment where you can pursue a particular high-point word you have to weigh that against the flexibility of keeping your ultimate destination more open.

Adding to this push your luck element is the fact that you don’t have to choose which letter on each card you’re using. So not only are you looking to keep rows flexible in terms of which words or group of words you think you can build towards, you have to keep your eyes on other possible combinations of letters from those cards that could give you an alternative word if you draw the right letter(s).

Pushing back a bit to a broader perspective, what do you do with the scoring system? A 4 letter word makes you effectively discard two of those cards. Is scoring that better than pushing your luck to try to extend the word further? If you draw a card you can’t fit anywhere do you bank the 3 letter word you have for only 1 point to start a new row, or do you discard it?

As you play more and more you’re going to hit a point where you know you need to start doing some rudimentary card tracking to know what’s left in the deck. Fortunately, Bez has encouraged that by making the numbers and suits of the cards aid that process, and there’s a nice explanation for how the cards were constructed and arranged that help you get some idea of what you should expect. Next-level play is encouraged and simplified here, which is wonderful.

But even as a casual exercise Mickell is delightful. It pushes my brain in sometimes painful but nice ways as I slowly try to retain sanity and keep some kind of coherent grasp of the english language. I don’t play many solo games, but this has to be one of my favorite small box solo experiences.

Pushing the experience from pleasant brain burner to maybe-pleasant headache inducer, Extendabell is certainly the tougher of the two solo games in Wibbell++. I first tried to play this at night after a long and stressful day and just about pulled my hair out. As the name implies, you’re trying to extend a word through the course of play, and in doing so you frequently have to completely redefine what you thought you were trying to do in the first place.

You begin with a hand of 5 cards and have to choose 3 of them to form a word. Unlike Mickell, Extendabell makes you commit to which letter you’re using as you play. This word forms the base of what’s to come. Each turn you’re tasked with extending the length of the word before you by exactly one letter with the 5 cards you have in hand. You can cover up cards as much as you want, but to progress you need to make a 4 letter word. Then a 5 letter word. Keep going–stretch it as far as possible.

You can keep the word length the same, and sometimes you’ll need to. Maybe you’ll keep covering up cards to clear your hand in an effort to try to draw into a letter you want. Or maybe you’re simply stuck and need some new letters to get the wheels of word construction spinning in your head again.

If Mickell is a somewhat thorny but pleasant stroll through the countryside, Extendabell transports you to a desert with a half-empty water bottle. I’ve actually gotten a headache playing this game. It’s challenging in a completely different and more grueling way. First of all, you’re only using half of the deck, so you don’t know precisely which letters will come up, and with which frequency. Secondly, any planning will be quickly thrown out the window. You may have some idea of where you want to go based on your starting word, but the cards you draw may completely obliterate that. Sometimes you’re just trying to make any word possible that’s one letter longer and ditch all planning whatsoever. Each turn is its own independent puzzle.

It’s a good puzzle, but I don’t find it quite as compelling as Mickell. Since you’re using half of the deck randomness plays a bit more of a factor (though it’s mitigated by having a hand of cards rather than just one). More significantly, all of my best games of Extendabell have exploited suffixes, which isn’t particularly exciting. It seems like the simplest way to extend a word, but the best moments are when you refashion a word into something completely different. It’s a minor conflict between what’s most fun and what’s strategically effective, but worth mentioning.

Extendabell is still a solid solo game, I just won’t be playing it nearly as much as its cousin. I prefer the push your luck, word collapsing stroll of Mickell more than the oft-grueling word refashioning desert of Extendabell.

I am not done with these Wibbell++ games! At some point I hope to get to at least a couple more, as I’m very curious to see what kind of wild inventiveness is possible with this deck. I’m not quite sure how to rate this game, since it’s a collection of many games. I suppose I’ll give it a rating equal to whatever I’d rate its best game. Anyways, I would certainly recommend it based on these two games, particularly if you’re someone like me who enjoys Scrabble but can never find an opponent.