Did you know that there’s a segment of the Gladiator film score that Hans Zimmer apparently turned into the main theme for Pirates of the Caribbean? I know this because we decided to put on the Gladiator film score to get into the mood of playing Carthage, the new gladiatorial deckbuilding game from Luke Seinen and SAS Creative, and I sat there confused how our Echo misheard “Gladiator” for “Pirates of the Caribbean”. My initial reaction was one of mockery, but upon further thought, I’m glad that even one of the most famous film composers of all time manages to recycle some of his old ideas. It’s the little things that give creative peons like me hope.

The soundtrack was appropriate, because Carthage is one of those games that other games reviewers might describe as “dripping with theme”, prompting the rest of us to wonder when theme became a liquid and hope that it doesn’t stain. The Frank Miller-esque art is evocative of the kind of grisly violence you’d expect from gladiatorial combat. Every card in the game has a bit of appropriate flavor text. There are minis and crocodiles and axes and swords and spears and spiky pillars! 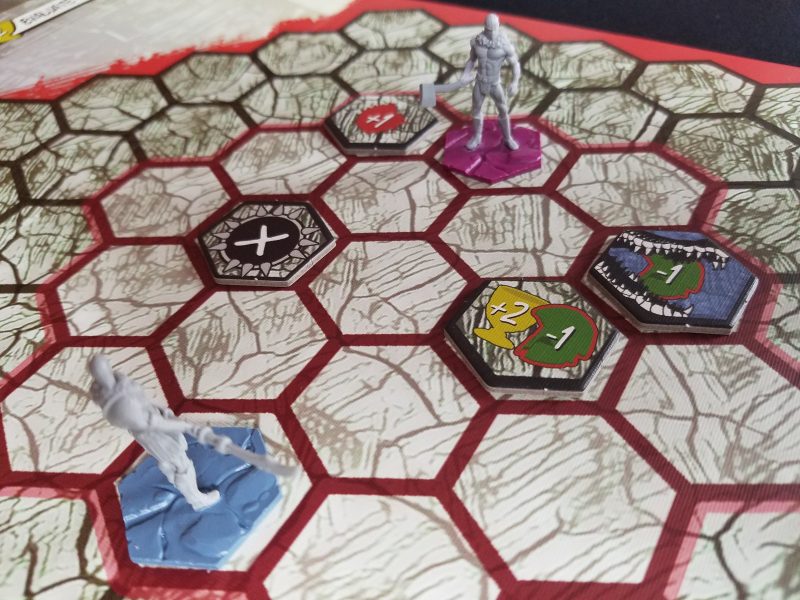 It’s got all of the trappings you’d want from a gladiator game, and because of that you’d expect the gameplay itself to be wild and bloody. Unfortunately, the core gameplay of Carthage is too safe. In a standard match, everyone begins with the same deck of 10 cards, which has been typical of deckbuilders since the beginning of the genre with Dominion. But whereas most deckbuilders last a number of rounds–easily over a dozen–before finishing, allowing people to develop and transform their decks in interesting ways, in Carthage you’ll probably only last about 5 or 6 rounds at most.

This issue is actually an interesting bit of design problem-solving that warrants a more in-depth look. Deckbuilders are all about starting from humble beginnings and building up to something exciting. That kind of progression is exciting for many of the same reasons building a deck in a more traditional CCG or LCG is exciting–you get to find combos and synergies and build something that is uniquely yours. You also need to respond to the “meta” of what the other players are doing and potentially move to counter their plays. All of this requires time, and in a more typical deckbuilder that is attained by making individual turns very short.

Carthage is a combat game where each player has a miniature in the arena, and if there’s a major conundrum with any combat game, it’s first-attack advantage. A game like MtG deals with it well by having attacks resolve simultaneously and then having first-strike as an ability to design with. Carthage has a bigger issue to face, however, because most deckbuilders have each player play out their entire hand of cards at once. In order to make the combat work, Carthage has each person play one card at a time, in turn. This slows down the game in a not-insignificant way compared to games where you play everything at once. 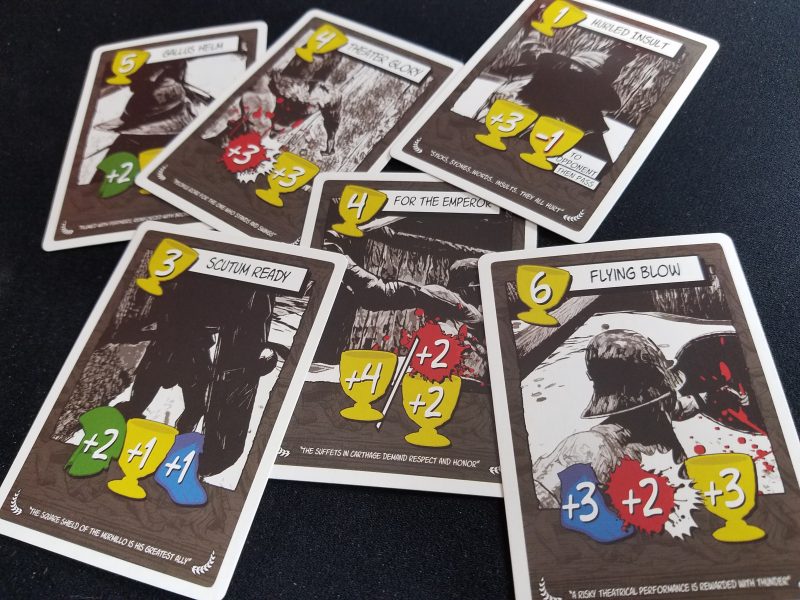 In order to make the game a brisk 45 minutes or so, then, it simply ends too soon to be completely satisfying. I’m not saying that the game should last the 20 or so rounds that Dominion does–it doesn’t have the complexity or puzzle solving to hold one’s interest for that long–but it doesn’t have the satisfying sense of progression found in better deckbuilders. I could see something like a pre-combat phase where people are able to quickly draft individualized decks before the confrontation begins helping the game. Carthage rightly encourages people to jump into the action early by having arguably the most powerful starting card be dependent on landing a successful hit on another player, and by having map tiles reward people who rush into the center of the arena. This is great, except that it contributes to the progression problem.

When I said earlier that Carthage plays it safe, I mean that it takes all of these admittedly difficult design problems and sort of rounds the edges instead of daring to come up with something more radical that might solve the problem completely. To keep this simple game to a reasonable playtime people are encouraged to fight early; when people fight early the game (measured in remaining hit points) is halfway over by the time people start to buy and use interesting cards.

Want to buy some cards that give you favor (the game’s currency) in order to afford a high cost card later in the game? You’re probably only going to be able to play that card once. Carthage is all beginning game, with a quick end game clash before it’s over. 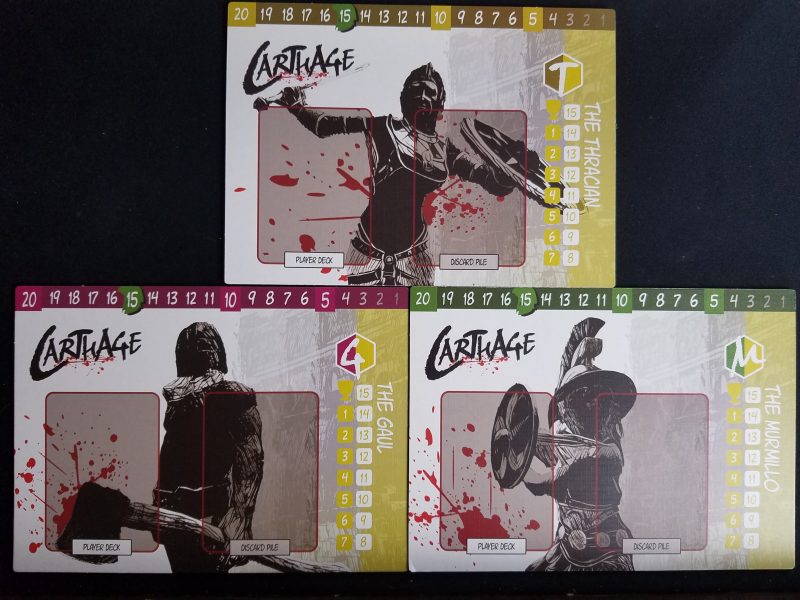 Weighting against this core weakness is the generous amount of play variability housed in the box. In fact, that’s the main draw of Carthage. I wouldn’t recommend playing the “vanilla” game even as a learning game. Dive right in and make it wild! You get a few optional modules and I enjoy all of them. Throw in a few new ways to spend your favor for various bonuses–trashing cards, gaining health, shuffling your discard pile back into the deck, etc. Make sure to give everyone their unique weapon cards. Change up a core rule by giving everyone more health, or progressively increasing amounts of favor income, or by making half of the arena covered in crocodiles!  Toss some tiles in the middle to give people more favor, or free attacks–spiked pillars are always a fun treat. When someone is eliminated before the end of the game let them come back as a wild animal. And definitely shuffle in the optional “theater legends” cards because they provide some of the coolest, most thematic, most hilarious sequences in the game. When your friend literally headbutts you into a spiked pillar to win the game–that kind of gory madness is Carthage at its best. 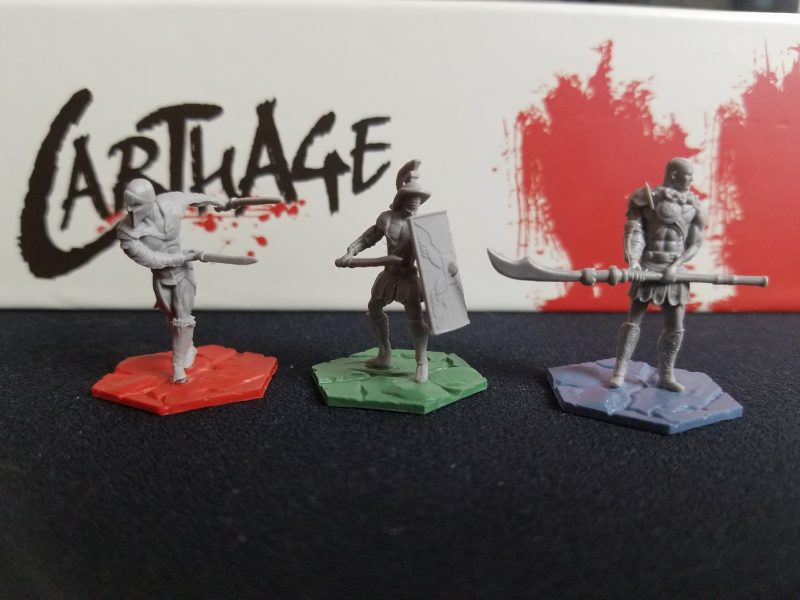 Unfortunately I have a hard time getting over how quickly, in deck-construction terms, it ends. Even with packing as many optional modules as I could to extend the game it only got to a level of what I would consider minimal acceptability. But even among my playgroup I was the coot. Ben liked the cinematic feel of it and Amber, who generally likes games where she gets to smash other players, liked smashing the other players. That’s certainly going to be the target demographic for Carthage. Persnickety people like me, who are looking for the next great deckbuilder, are going to be disappointed. It’s a shiny package piled with customization options, and I even laughed heartily when I was plowed into that spiked pillar. Unfortunately the rest of the experience wasn’t as memorable.

+Tons of additional modules and variations to play with

+Very simple to learn and jump into

-Not enough time to get a good progression of deckbuilding

-Feels too safe and leaves too much to the players to customize. I want to see the designer’s vision