Deep within the heart of the Terror Swamps, the noble adventurers plod through the muck, their…paws caked with mud. The heroes are pugs, okay? They’re out wandering places and fighting other dogs, but, like, in a cute fantasy way. They’ll face packs of Chihuahuas, giant bulldogs, and slimes. Of course there are slimes.

I have no clue. I didn’t bother to ask.

Despite the inexplicable theme, the art in Fantasy Pug Quest does what it’s trying to do well–translate traditional D&D style fantasy tropes into this canine universe. It certainly commits to the part, fashioning pugs as wizards, bards, zombies, and skeletons. Despite that, it somehow seems not as obviously silly as the premise suggests, putting it in a kind of tonal uncanny valley. Still, I suppose if you somehow have an affinity for pugs, this will be right down your alley. 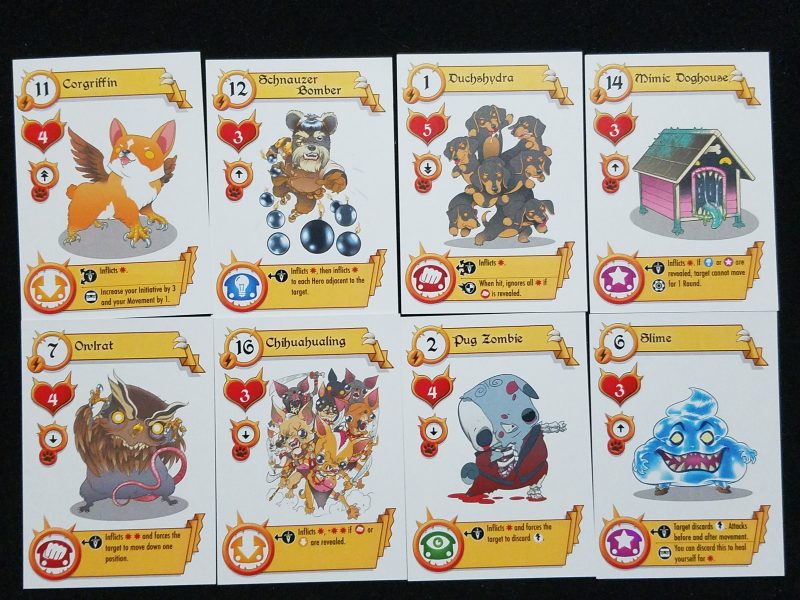 Fantasy Pug Quest tries to fit into the co-op cardplay fighting niche but tends more towards turn-based RPG video games rather than the intense hand management of something like Gloomhaven. Instead of working through decks of abilities on your cards, you’ll be playing different types of energies in order to power up abilities you have inherent to your class.

All of the action plays out on a simple grid system, where enemies scoot along like they’re on moving sidewalks attacking willy-nilly with an extremely simple AI system. On each player’s turn they’re going to get a couple of actions to allow them to move and get the energy cards they require, and then they can activate as many abilities as they can pay for until they’re done.

The result is that the beginning of each of the game’s three rounds really shines as everyone goes around smacking around enemies and activating cool powers. Then everyone gets low on cards and has to spend their turns gathering and swapping out cards until they can activate cool abilities again. The cadence is a bit disappointing as the final enemy you’re probably going to kill is the boss, so you’ll spend some time dodging them until you can buff up enough to be victorious. There’s a time limit on each round, sure, but that doesn’t help the mid-round lull.

The character abilities themselves are interesting and diverse–you’ll work together to sync up powers, heal each others, and do nice cooperative things. I kind of wish there was more variety and iteration on these powers–each class starts with three abilities and can gain access to two more as the game progresses. That’s nice for the first couple of games, but can potentially get a bit samey over time. 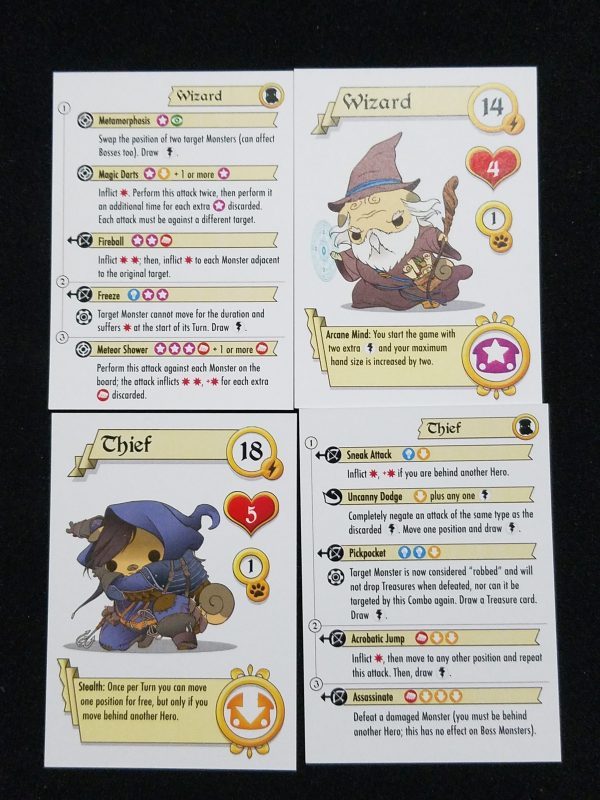 That said, it’s a relatively inexpensive, small box game that has most of its variety in enemy types and treasure cards, which is probably the wise decision assuming they were trying to work within a hard card-count limit. Gaining treasure is fun and can give you anything from a one time use ability to a new weapon that provides passive powers. Every enemy defeated will drop a treasure and give the person who dealt the killing blow an experience point used to unlock those more powerful abilities.

But at the end of the day I don’t have a lot of definitive things I can say about the game. Due to this arriving at a particularly chaotic point in my life, I was not able to play it nearly as much as I’d like for this review, and I wasn’t able to work with the publishers to clarify some of the many rules questions we had during play. The pictures here are all from a prototype copy. The rulebook is still in a really rough shape, and it was frankly pretty frustrating to get to a point where we thought we were playing mostly correctly.

The overall structure of the rulebook is not optimal, as it goes over card layout and iconography in detail before ever getting into things like what a turn looks like. In those areas it delves into rules minutiae that have no context, so that when you do get the context you’ll either have to go back and search for the applicable rule or you’ll forget about the previously-ignored rule. This made what should be a pretty simple game into a LOT of page flipping.

Other rules simply aren’t clarified at all. For instance, do enemies move then attack, or the other way around? If the boss is supposed to do its random ability before its attack, why is the attack listed first on the card? How long do passive abilities last? Seriously, how long? What does it mean when one ability says “for the duration”–we were never told a duration? Does the element deck have a 5 card faceup pile AND a discard pile, or are they the same thing? I’m sure a more careful reading of the rules might clear up a couple of those questions, but the fact that we had so much difficulty in the first place is the problem. That said, it’s a prototype, so I expect there is editing still to be done here. But that’s why I’m fashioning this somewhere between a preview and a first impression. 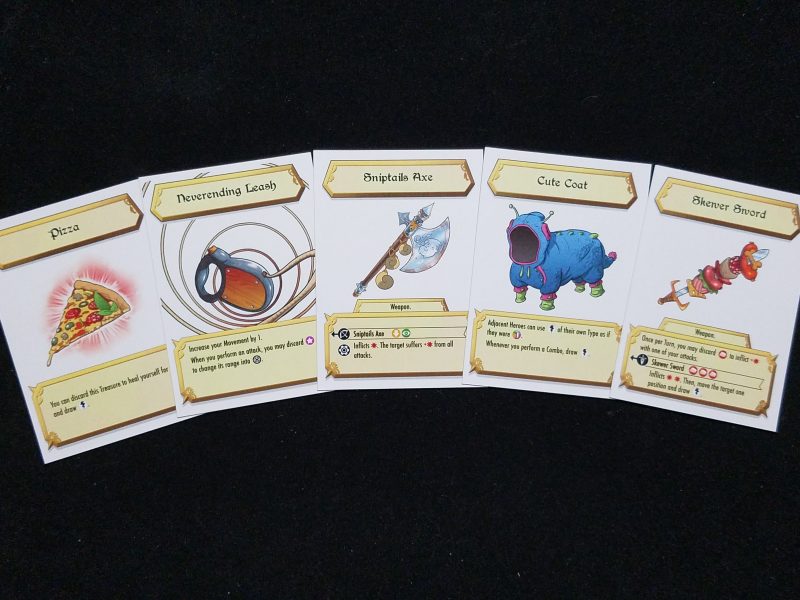 The only other major problem I had with the game are the tokens provided to keep track of passive abilities. They all have the same symbol with differently colored backgrounds, and you’re supposed to use them to distinguish between everything activated. But that means that you need to use color, by itself, (and sometimes color that’s very close–there’s a light green and a medium green) to figure out what kind of buffs you have on your character. Good luck to colorblind people, and the rest of us don’t have it much better. Even in our three-player game a number of these tokens stacked up and nearly every turn I had to remind myself of what buffs I had going on. On top of that, you need to read through all of the enemy abilities carefully, because some can affect your actions. And every round there’s a different rule change based on the randomized land you’re in. It’s all a bit too much mental bookkeeping relative to the strategic complexity of the game.

I’m not going to make any kind of final proclamation about Fantasy Pug Quest right now. But the Kickstarter is currently running, so I’ll say this: the game as I have it right now with the prototype is simply too rough around the edges to recommend in any capacity. But when I think about a best case scenario in terms of post-Kickstarter polish, I think it could end up being a decent game. I’d prefer heavier fare for my cooperative games, but if the theme and/or style intrigues you I’d recommend giving it a look. If you want something you can play with your family or if you want a cooperative card game that takes more inspiration from Final Fantasy than MtG, this might fit into that niche well. Or if you just really really like pugs…well, you do you.