The Supertall Kickstarter is online until 6/30

Straight off their rousing success with Sprawlopolis, a genuinely great cooperative puzzle game, Button Shy is now kickstarting Supertall, a game of strategically building up skyscrapers and card manipulation. Like all of their games, it’s comprised out of a mere 18 cards and fits into a bi-fold wallet. The aesthetic kind of reminds me of Sprawlopolis, with the friendly colors and clear iconography, but the gameplay is quite different. 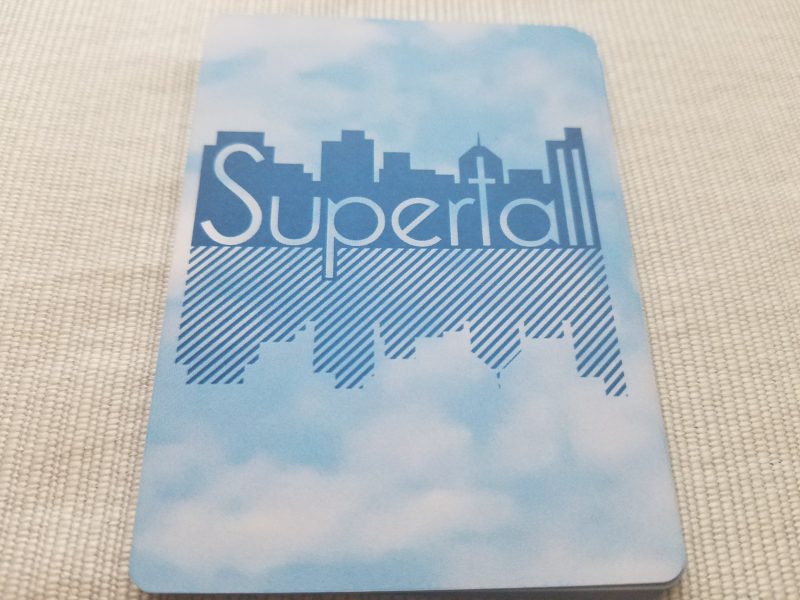 Essentially Supertall is a tableau building game with an emphasis on verticality. You’re going to be drawing a single card from the deck on your turn and doing one of three things: placing it on top of anyone’s skyscraper, placing it on top of city hall, or using the ability listed on the card and placing it back on the bottom of one of the draw piles. The abilities let you shift around cards in various ways, so nothing you build in your tableau is necessarily safe. Using the abilities also prolongs the game, which makes the game expand in length as it progresses. In my games, at least, once you’ve gotten most of the cards out, people start using abilities more frequently and each card becomes a precious resource.

It would be an interesting dynamic if it didn’t induce so much whiplash in the pace of the game. Because in the beginning of a game of Supertall, you’re essentially going to be just drawing cards and placing them down in front of you. Maybe you draw something that you want to stick your opponent with, but given that most of the scoring opportunities come from having more cards in your tableau, that’s a tough pill to swallow. In theory, because you can only put cards of an equal or greater value on top of a skyscraper, any high value cards drawn early ought to be shuffled in. But you have either 2 or 3 skyscrapers total, and on average each one will end up with fewer than 3 cards, so you can get away leading with something like a 4 value card (out of 5) on one of your construction sites.

The big problem is that there’s not a lot of room to plan ahead, which is exactly what you want to have in this kind of game. The draw deck is random, except for the cards people put back underneath after using their abilities. You can try to keep track of those cards and know what’s coming up, but that’s a headache that feels unnecessary. In fact, I’m not unconvinced that the game wouldn’t be better with all of the draw piles face up, so you can plan very far ahead and try to better predict what your opponents will do.

As it is, all of the meaty bits of the game fall into the second half, where there are only a few cards left to play and you try to take what you’ve done with your skyscrapers and manipulate the cards as best as you can to score points from them. The top card of each skyscraper determines how that stack will score, so it’s only what ends up on top that really matters. How much you score from a given card will depend on what’s underneath it, but you don’t have that much of an ability to plan for a particular card due to how much card movement will be happening, so by the time you do get to the latter half of the game you’re trying to squeeze out points wherever possible instead of helping a plan come to fruition. Why try to set up a tower with multiples of the same value card unless you have a reasonable chance to end up with that tower topped with the card type that allows you to score for that? Is that worth possibly having fewer cards overall and less flexibility?

The best wrinkle in the game is the City Hall, where anyone can play cards in any order. At the end of the game, the type of card on top of City Hall does not score for anyone. This bit of flavor makes the end game work much better than it would have otherwise, because not only are you trying to make your skyscrapers score well, you’re shifting around the City Hall pile to keep it from blanking your points.

Eventually, however, in every game of Supertall I played I got a sense of inevitability towards the end. In one game my opponent and I got locked into an infinite loop that I could only break by playing something sub-optimal for me (there was no way for me to win at that point anyway, only delay the game). In another I couldn’t manipulate the cards enough to have any chance at winning. That wouldn’t be a problem if I could look back and see what I had actually done wrong to get to that point, but I had no clue at all.

The narrative arc I get from a game of Supertall is so jarring that I can’t call it particularly pleasant. The first few cards don’t seem particularly consequential–at least I can’t see how they are. Then you get to some turns with genuinely interesting and tough decisions. Finally, the end of the game just…plays out. It feels like a chess game where my opponent and I get locked into a series of forced moves, but I can’t figure out how I could have avoided that locked-in path to begin with.

This is one of the reasons I’m labeling this as a First Impression: I feel like I’m missing something. Some bit of strategy or a new way of looking at the game that would make the early game feel consequential and the end game cascade feel like the inevitable result of a hard-fought battle. But right now when I finish a game of Supertall I feel like I’ve been a bit conned. At what point did the decisions I make doom me or cause me to succeed? Given the construction of the draw deck, could I or my opponent have maneuvered out of any predicaments we were stuck with? Right now I really don’t know what the answers to those questions are. My search to find the answers has been marked by an emotional 50/50 split between frustration and puzzle-curiosity.

+A good amount of complexity generated from 18 cards

+Certain parts of the game have tough decisions

-Beginning of the game feels like you can’t plan ahead

-End of the game feels inevitable